THIS IS KILLING YOUR BUSINESS! 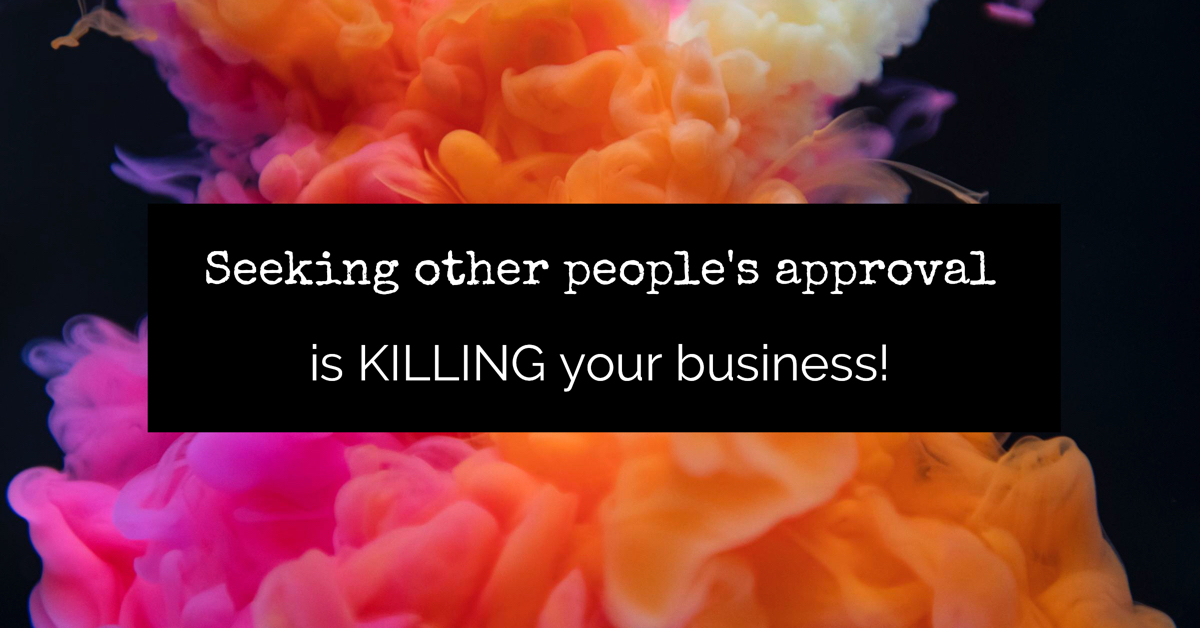 From as young as I can remember, I’d always done whatever it took for people to like me and get their approval. I know this is a natural part of being a child as we are trying to figure out the crazy world which we have been born into.
We want approval
We want to be liked
We want to feel accepted and that we belong
Nobody wants to feel like an outsider (although I now know that many of us did)
Yet when you’re a grown ass woman and STILL doing it….?
It’s gonna kill your dreams faster than anything else
Have you ever posted something on social media only to be checking in on it for a good while afterwards?
Sneakily logging in and looking at what’s going on?
How many likes has it had?
How many people have commented?
You try and convince yourself that it’s no big deal but secretly inside you’re turning this into a whole fucking story which is connected to your self-worth and need for validation.
You start to make it mean something.
And suddenly within the blink of an eye you’ve convinced yourself that nobody likes you, you’re invisible to the world and no matter what you do nobody is interested in what you have to say.
*cue sad face, feeling fed up and a handful of biscuits
We look for that validation from our followers or people who may randomly come across our posts and we attach so much to it. We allow strangers to validate who we are and we give our power away in the process.
It’s so easy to become obsessed and even addicted to these external validation markers which come in many forms. I know I certainly have in the past just like I was when I was little.
Yet here’s the thing…….
When it comes to creating and growing a successful business which impacts other people’s lives, we can’t allow this desire of needing other people’s approval and validation of who we are to ever be part of our business.
Unfortunately so many of us do.
We filter what we say.
We don’t show up fully as ourselves for fear of judgement.
We use the number of likes on a post to determine whether we think we are enough or in some cases not and we don’t want to cause conflict so we try and people please our way to success.
That shit won’t ever work.
And I’m talking from experience.
The first two years of my online business I was that person. I spent the majority of my time seeking other people’s approval and using their approval as a way of validating my own self worth. And it got me nowhere.
My message wasn’t clear as I diluted my true soul work incase people didn’t like me!
I didn’t attract the right people as said message wasn’t calling them in.
I became the very thing which I never thought I would….vanilla ice cream!! Just a noise amongst the jungle that is social media, blending into the background.
So what can we do about it?
Well one of the most powerful things which I cannot stress how fundamental it is for really stepping into your true potential as a business leader, is dropping that need to get approval from somebody else.
Their approval of you doesn’t fucking matter!!!!!!
You’re not here for everyone to like you.
You’re here to like yourself first and foremost and the only approval that you should ever be seeking is that of your own
What if you could choose to believe that everything you do is enough? Everything you create is worthy of being successful? Everything that you desire is exactly how it should be? You’re already whole and you’re already awesome and no matter what other people say, think or believe, it doesn’t change who you are on a soul level.
So should you get a negative comment on your Facebook ad or some dick thinking it’s funny to troll you, it doesn’t affect you. The same way that a positive testimonial from a client doesn’t affect you. Don’t get me wrong, feedback is lovely to have, but it should never affect who you are on a soul level for when you fully know that you are already amazing, external influence/validation both positive and negative, play no role in you taking the momentum of your business growth forward.
You just keep on going
Keep showing up
Keep doing you
Keep serving your audience and loving them hard!
How would you like to STOP the need for external approval??
The Mindset Mastery School Mastermind begins in a few weeks which focuses on all of this!
Your thoughts
Your stories
Your beliefs which are limiting your potential
If you want to get out of our own way and stop seeking other people’s approval, drop me a message and we can have a chat.
Or you can take a look at www.rachelfoy.com/mastermind
The world needs you gorgeous!!
I believe in you 😉

By signing up for the mailing list you will also receive the latest news and updates around getting more clients and igniting your success mindset. You can unsubscribe at any time

You have Successfully Subscribed!